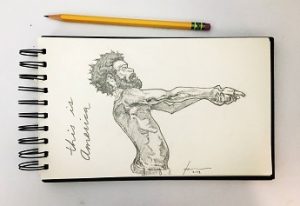 Woodhill – what a strange afternoon. I think it has taken me so long to write about because I am not sure what to say. The afternoon just begged loads of questions which I think I hoped time would answer.

Anyway, to start somewhere, I had very little sense of being in a prison. It is true that Woodhill is built on very progressive lines. It is bright, simple, relatively spacious and attractive and apparently in stark contrast to the Victorian prisons which reinforce all the clichés. I had to keep reminding myself it was A-Category security although there were signals. We were shown emergency bells; there was a long, rigorous entry procedure where all sharp objects were removed from us; we were warned not to go within five feet of any dogs because in the words of the ‘Head of Education’ – ‘The dogs don’t distinguish between prisoners and actors’.  So from the moment of arriving until the beginning of the workshop, I felt like a city dweller entering the forest – I had been told to look out, kept my eyes open but didn’t really see what I expected.

Or maybe better, I felt like a British tourist arriving in America – I knew the language, the culture was familiar but I knew I was in a foreign country. That was another thing – I think of ‘prison’ as I think of ‘Hell’. They are simply places I do my best to avoid – deterrents – but I never stop to think what actually happens when you are there. Woodhill felt like the land on the other side of the line – beyond ‘normal life’, beyond the law courts, beyond the dock – a place I hadn’t stopped to think about much – which I was almost surprised to find actually existed at all.

I think the strength of the workshop was that this sense of unease largely evaporated. Due in large part to Bruce’s energy and commitment, hackneyed words but in this case completely accurate, we very quickly felt like one group sharing one culture, forging it as we went along and all equally challenged to enter yet another foreign land – the human imagination – with Shakespeare, an able guide. I personally find quite a lot of Bruce’s exercises very demanding but what I enjoy and what I think the participants of the workshop seemed to respond to was that he encourages a joint responsibility for proceedings. You explore using Shakespeare as a medium but you are also always responsible for the whole group. If I am floundering, then you will help me. If you are floundering, then I will jump in. This seems to override self-consciousness and encourage participation because this group amazed me with their contributions – put me to shame in some cases.

Most notable was the Witslings – a point in proceedings where we were all encouraged to write some lines of iambic pentameter employing a line of Shakespeare. I find this really hard and fully expected the prisoners to resist but with a little encouragement everybody wrote something and what’s more seemed hungry to do so.  We all had to read our verse out and by now we are all just people grappling with our problems, our visions, our understanding and sharing them with each other.

It is at this point, inevitably, that I find myself most curious to know what each prisoner’s crime was and why they had committed them. I just couldn’t see the difference between us anymore and it was helpful for Bruce to underline on the way home that for the work he does it is unhelpful to know about the crimes – he does not want to be prejudiced. Helpful also to know that he admits he probably would be prejudiced.

I was really glad to take part – quite confused as to what I thought about the whole experience but glad that I was doing something that opened doors, crossed boundaries and concentrated on what we have in common. I guess in the end I’d rather be left with the questions than think I have all of the answers. Thanks for the opportunity LSW. 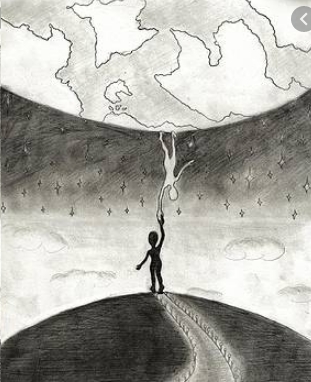