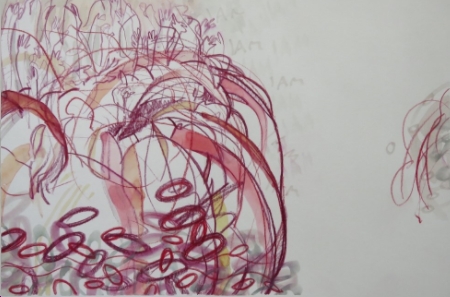 This was my first prison workshop and I was both excited and nervous about it. Although HMP The Mount is a modern prison with lots of facilities for the inmates, I was still most struck by the utter bleakness of prison life – high fences, barred windows and the constant ‘lock and key’ lifestyle. The workshop was held in a spacious, high-ceilinged room usually used for worship.  As it turned out we needed the space as we had 25 inmates and 12 actors to accommodate!

There was a genuine enthusiasm for the work from all the inmates and right from the start a playful energy was very evident! We started with games like ‘passing a clap’ and ‘zip, zap, boing’ (although we used words supplied by the inmates – murder, love blasphemy) and moving on to games with Shakespearean text and character names – there were some fantastic physicalisations of names.  I particularly liked Cymbeline which was shown as playing the CYMBLES and snorting a LINE of coke.  The group mirrored back the physicalisation of each name as well as speaking the name.  We were all enjoying the imaginative responses of each other and the group were very focused and engaged.  When we came to using text from Shakespeare the group focus and concentration were palpable.  As one of the inmates said, he didn’t really understand what the Shakspearean text was about but by listening he was still able to respond to it.

For me as an actor it was wonderful to see a group of people enjoying listening to the language and responding to it in an uninhibited way.  There was a genuine enthusiasm within the group from both the more vocal inmates as well as the more reserved ones.  Indeed, one of these, Stephen, at the end of the session quietly asked if we could find out if there were similar workshops he could go to when he gets out of prison in April.

I look forward to the next session at HMP The Mount.  I think we all found it inspiring, exciting and fun.