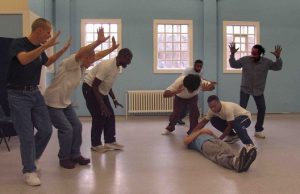 Caught in the Act

as published in The Times

In Brixton, prisoners are holding hands, dancing a pavane and finding theatre a liberating and humanising experience

Can imprisonment breed creativity?  It did for Sir Thomas Malory.  As a free man in 15th century England, his activities included rape, extortion, burglary and attempted murder.  In the confines of his cell, however, the “Knyght Presoner” was engaged in writing what is perhaps the first piece of modern fiction: his epic Arthuriad Le Morte Darthur.  And Malory is not alone:  Anne Frank, Oscar Wilde and Jean Genet have all produced enduring pieces of literature from captivity.  (The less said about Jeffrey Archer the better.)

But the real, lonely, desperate experience of prison seems to find its most forceful and cathartic expression in the more communal activity of drama. The South African playwright Athol Fugard based The Island on the experiences of two former prisoners who performed a two-man version of Antigone when serving time on Robben Island, while records of a play staged in the Port Jackson prison colony in Sydney are at the heart of Timberlake Wertenbaker’s Our Country’s Good — a play that has struck a particular chord in schools, where it has become a set text.

Drama, these plays suggest, is a humanising and empowering activity that can take place in the most inhumane and totalitarian environments. But despite all the democratising efforts of visionary practitioners like Fugard, it rarely reaches the people who need it most — the poor, the oppressed, and the imprisoned.

An organisation called the London Shakespeare Workout (LSW) is determined to change this — not only to bring theatre, and especially Shakespeare’s theatre, into prisons, but to make it a central part of prisoner rehabilitation. Founded by Bruce Wall in 1997, alongside Dame Dorothy Tutin, the LSW holds weekly workshops in 65 prisons throughout Britain, led by professionals, including Fiona Shaw and Jonathan Miller, and involving a significant number of convicts — almost 2,000 last year. They have also staged a considerable number of major productions in prisons: highly successful adaptations of Shakespeare and Lorca, in which professional actors have been indistinguishable from inmates.

Last month, the LSW embarked upon its latest and most ambitious project at Brixton prison: the Dream Factory, the first vocational arts programme in a British prison. It is billed as a “place of play”, but arriving at the prison to see the first work-in-progress performance, playfulness is not much in evidence. Rolls of razor wire top the high, grey walls, and the audience’s mobile phones are removed and zipped into plastic bags before we are ushered through several heavily locked doors into a room which we are told was the prison mortuary in the 19th century.

The stench of cadavers has, thankfully, been replaced by the lively hum of pre-performance nerves. When the eight physically commanding young men, seven inmates and one former offender, step forward, it is to the unlikely sound of a courtly Renaissance motif on a piano. They hold hands and dance a sober pavane, dividing a Shakespearean sonnet between them. The lines instantly chime with our surroundings, as they “moan the expense of many a vanished sight” and we glimpse, through the window, another grey wall. In a moment, the men break their couples and begin a primitive chant; circling and cackling as citizens of Rome. Their blood-lusting cries of “Tear him!” echo around the room, sending shivers through the audience as Cinna the poet hugs himself in terror.

Later, Hazel — a huge man with a shrub of an Afro — confirms the production’s flair for accomplishing the improbable, as he crouches, springs and leers his way through a scene from As You Like It, bringing patois wit and amorous menace to an unforgettable “Rosssslin”.

Seventy per cent of the show is written by inmates — either adapted from Shakespeare, or entirely original, as in a scene in which Hazel turns the tables on a hypocritical prison official. Meanwhile, Fabian, a reggae songwriter, has turned his hand to iambic pentameter. The show ends with his sonnet “To Doubt” a touching statement of self-determination, read by his fellow inmate Chris.

“Confidence is our common denominator,” says Bruce, and it’s a theme that the inmates return to again and again. The wiry Mancunian Chris was previously cripplingly shy, unable to make eye contact with others, especially black inmates. He was a skinhead, he says — he still has a buzz-cut, but he has now rid himself of the associations: working with LSW has given him not only confidence but a raft of good friends, of all races. I met him in Leicester Square — setting a historical precedent, he had been granted day release to attend the screening of an LSW documentary. After a year in prison, Chris was expecting to be anxious outside, but instead he was relaxed and energetic, admiring the bright colours of the Trocadero centre and consuming his cappuccino with relish. He has no doubt as to why he’s coping so well: the Dream Factory.

Workshops, Chris tells me, begin with breaking down barriers, playing games, creating an environment in which communal laughter — so rare inside the prison’s walls — becomes a possibility. Rehearsals are intense: “There’s an electricity, an aura around you. It’s like you’ve got a secret, a good secret.” And why Shakespeare? “Initially, the difficulty itself is inspiring. But then when you get to the words, they’re just so deep. I’m a criminal, for God’s sake, but Shakespeare has taught me to put words to my emotions, to communicate.” Chris, like many others, will be returning when his sentence is over, to be a mentor to others and keep the chain unbroken. “We know this is history in the making. We want to make it work.”

So far, the signs are promising. This is an experiment.  The Dream Factory now has a dedicated room in Brixton jail to run workshops for a year and rehearse productions. For the first time in prison history, inmates have been transported “for purposeful activity” in order to take part in the Brixton programme. At the end of the year, the core group of 20 offenders, of whom Chris is one, will graduate and receive Equity cards — Chris has also earned a scholarship for a month’s training with the British American Drama Academy at Balliol College, Oxford. And the enthusiasm among the participants is overwhelming. “I’m in it for life,” says Brian (who played Cinna), citing former offenders like Gary, who is now working as a professional actor. Given the dauntingly high re-offence rate — 58 per cent for adults — the sense of purpose among Dream Factory participants is an encouraging first step towards rehabilitation and reintegration.

Paradoxically, confinement has given these young men a space in which they can be more creative than ever before. But, as Chris points out, the blessing is also a curse: “Your senses are open for the first time in ages, and all you can see is a tobacco-stained wall.”

When time is called at Brixton, the Dream Factory is closed.  The performers, still buzzing with energy, are led back to their cells, and the audience files off, out into the damp autumn air.  a n 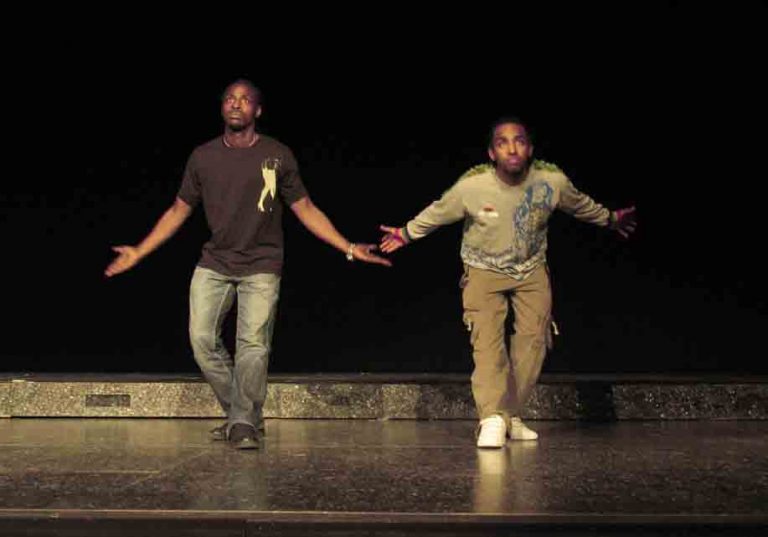