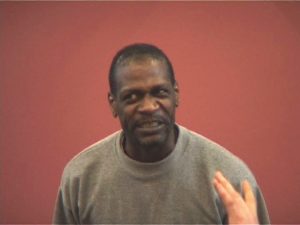 We, the audience, were gathered in the chapel of Pentonville Prison, a monumental and forbidding building.  This is an inner-city prison where serious criminals are locked-up for a very long time, and it took us over an hour to travel the few score yards from the prison gates to our seats.  Our passports were checked, our bags were searched, we were searched, we were frisked thoroughly, and we passed through a series of doors, like prisons in miniature, which locked electronically behind us a few long moments before they unlocked in front of us, only to lead us further into the prison compound.

There were bars on the windows of the chapel and in the central space of men were standing, all dressed in identical grey tracksuits.  This was the cast of the play we were about to see (some of them were prisoners and some were professional actors) and they shook hands with us and introduced themselves.  Later, we were told that this was the way the London Shakespeare Workout Prison Project sessions always begin.  Many of the prisoners are barely literate, and probably join the Workout to escape the monotony of their cells, but the leader of the project opens with electrifying words, ‘Shakespeare!  He’s for you, and no one can take him away from you!’

Hearing this, I recalled, with a jolt that Shakespeare did indeed write for all of us, not just the respectable or the highly educated.  Many of his plays were first performed in Southwark, one of the 17th Century London’s most disreputable districts, and the majority of his audience would have been illiterate.  But could modern criminals really feel connected to Elizabethan blank verse, to poetry, to Shakespeare’s emotional subtlety and complexity?

The play began.  It was a pared-down version of ‘Macbeth’, directed by the Project’s Founder, Bruce Wall.  Shakespeare’s verse, unadulterated, with a few additional speeches written by prisoners themselves and (a crucial innovation this) a classical chorus.  The chorus was there to enact the workings of Macbeth’s tortured mind, chanting the speeches of the weird sisters and echoing the last words of many of Shakespeare’s lines.  In a way it gave them a dreadful emphasis and resonance.  The prisoners had only two weeks in which to rehearse the play but their performance was faultless.  Although the parts of Macbeth and Lady Macbeth were taken by professional actors, the inspired use of the chorus as echo meant that the prisoners in a sense shared their roles and were contained by them.  These men were criminals, who, like Macbeth, had themselves thrown over the normal constraints and decency and ‘killed the king’ internally; perhaps some of them had murdered in external reality also.

Watching the chorus, I wondered which were actors and which were prisoners.  Could one tell by their accents, by their haircuts?  It was only when they spoke some of Shakespeare’s most terrible lines that one could sense who was acting the words and who was living in and through them.  When Malcolm told Macduff to ‘Give sorrow words / The grief that does not speak / Whispers the o’er fraught heart and bids it break,’ he might have been speaking for them.

As well as taking part in the chorus, some of the prisoners were given individual roles to play.  One stood out as a chilling and all-too-believable murderer; another, with the pinched and deprived look that told of a childhood in institutions, spoke pert, witty and complex Elizabethan prose as Macduff’s young son; a third was an extraordinary Macduff, regal and commanding when silent, and full of desperate ferocity when speaking verse.  Shakespeare’s lines seemed only just strong enough to channel his pent up aggression, so that I watched on a knife-edge to see if the container would hold*1.

These men must have been the kind of children we have all seen in our consulting rooms: deprived and abused boys who have no words to think about their feelings and couldn’t bear to do it if they had; boys who can only evacuate their intolerable emotions by swearing at the therapist and attacking her mind and her room.  Yet these boys, untreated, adult and in prison, were speaking Shakespeare with an intense, a desperate understanding.  Watching them was an extraordinary experience that left one full of hope.

Their superb version of Macbeth used only two props, the crown of Scotland and the cross on the chapel wall.  As in Shakespeare, Macbeth was killed by Macduff, be he also survived to know himself as Malcolm, to become king of himself as the result of an inner transformation.  The LSW production made it clear that ‘Macbeth’ was not entirely tragic, because a secondary character, at first sight relatively unimportant, took on emotional maturity as a result of the life and death of the hero.  In this way, the play’s redemptive quality was underlined, and Macbeth himself became an immature aspect of Malcolm, which could properly be worked through and left behind.

After the play we heard poems and songs, some of them touchingly Shakespearean in flavour, all of them written by prisoners on the LSW project about the experience of being in prison, the emptiness and the despair of it and the transforming experience of acting Shakespeare, of finding that 400 years ago someone had discovered words strong enough to hold the feelings.  We also heard about the work of the project, which went into 52 prisons last year alone, and is available for prison staff as well as inmates and ex-cons.  Despite, in many cases, histories of addiction and serious crime, none of the LSW prisoners have since re-offended, a remarkable statistic given the re-offending rate for young offenders is 76% and for adults 58%.

‘An Animated Macbeth’ took me into a vicious, self-deceiving and self-destructive world, but remarkably, it then brought me out of it again with a renewed determination not to shirk those grim cases with brutalized latency boys, and a renewed faith in the power of truthful words to free us all.

The Tavistock Institute of Medical Psychology

*1      Bruce Wall asked that it be noted that the inmate, Gary, playing Macduff has said that “Shakespeare is the best therapy I’ve ever had in my life”. 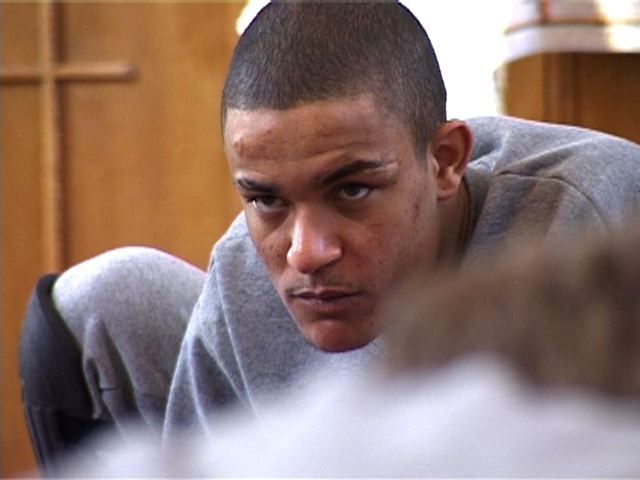